Customer reviews
4.9
Based on 39 reviews
Write A Review 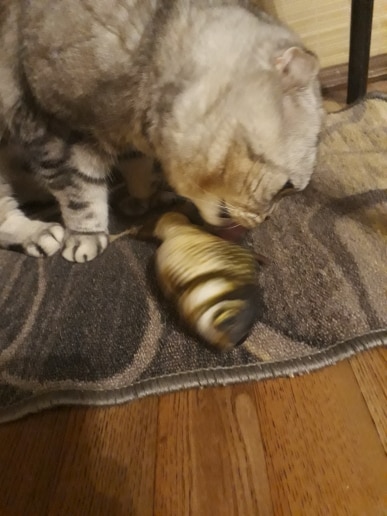 I needed an interactive toy for my 2 active cats. Something they can play by them self without looking at me to play laser with them. I know my cats are spoilt brats. Order was delivered promptly and came well packaged. It came exactly as described, had a fragrant catnip package included, was easy to get assembled and charged quickly! As soon as I set it down on the floor, my cats were on it. It doesn't go right off- the motion activated sensor is programmed just right so your cat will need to nibble or swat a couple times first before the fish toy will start flopping around. It looks realistic how it flops and it majes a sound similar to a mouse squeak as it flops. One of my cats jumps in the air each time the fish toy starts flopping, even though we've been playing with it for a week, it always takes him by surprise. It is hilarious!!! Definitely a must-have cat toy! It comes with a USB cord to put in your plug to charge. Just turn the toggle switch to OFF when done playing to keep it ready for play later on. I have also put some catnip inside the Velcro area. 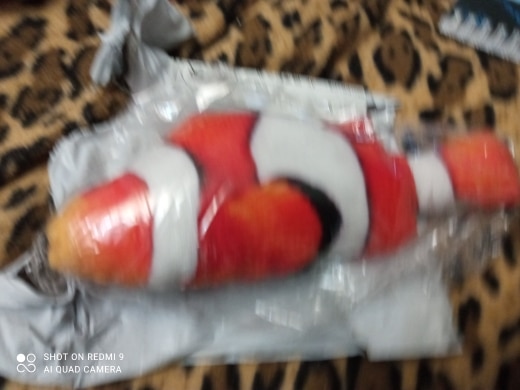 Excellent quality and the USB recharging is awesome! There is a zip compartment in the belly just open it up to switch it on/off, or charge it, or add a fresh catnip pouch (optional, it came with 1). Kitty loves it! She’s a feisty 3 year old, was a feral stray kitten we found at about 5 weeks, still retains some wild ways. We had to stop letting her out because of killing things like frogs, baby bunnies, etc and she brought a live mouse in through the dog flap about a month ago so now she’s grounded for good. With keeping her inside she definitely needs appropriate outlets for her instincts. This fish is a good size for her to grab and kick. Great workmanship and materials. We’re having fun watching her enjoy it. 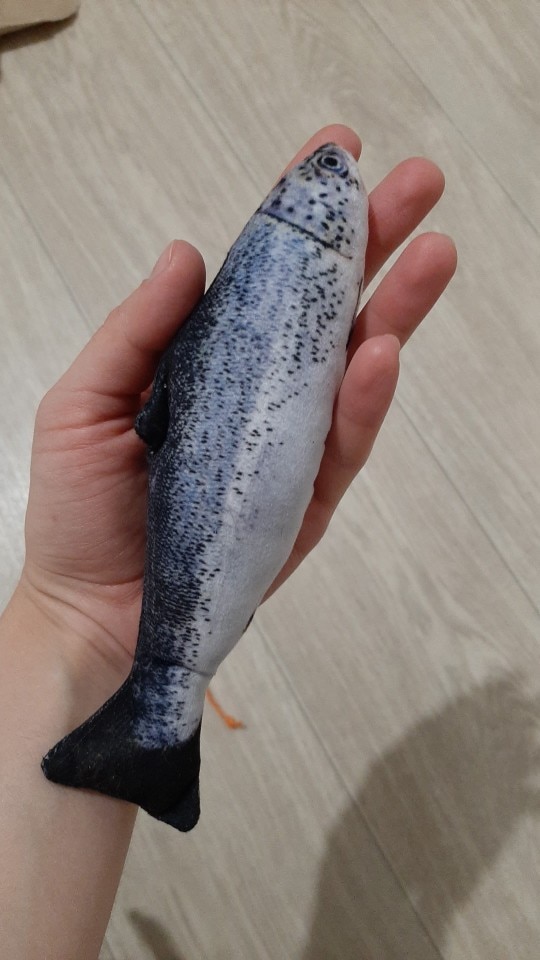 Cats were a bit confused at first and it did take catnip to get them interested. Fun toy for them but likely only during limited catnip play time. Hoping they may get more used to it and intrigued. Will rate with more time with it. Easy to charge. Update: Cats seem to be enjoying this a bit more and draggin around the house 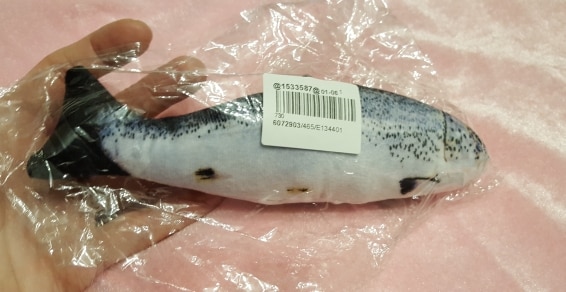 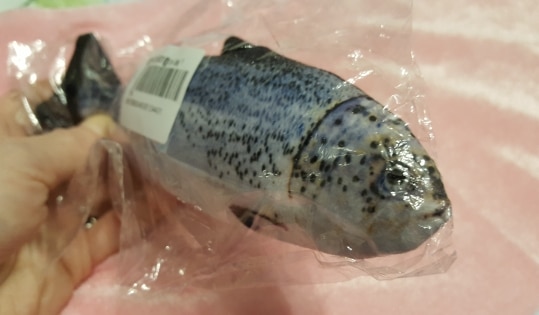 Santa brought my cat, Lily Anne, a floppy goldfish. She LOVES it! It brings me so much joy to see how happy she is with it. It isn’t just a toy she will play with and forget about. She has played with it in the morning and at night without me initiating her playing with it. The movements on the fish are impressive and entertaining. I like how it will quit flopping for a little bit, but if the cat touches the fish belly, it will start flopping again. I also love how it is rechargeable. HIGHLY recommend ❤️ 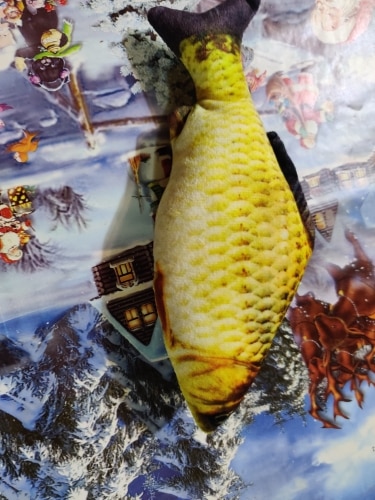 I bought this toy based on reviews, as I was Babysitting my two 3-year-old cat fur-babies for a few days. They were interested in the "newness" of it, but lost their engagement with it after 15 minutes. Owners take away for a few days and re-introduce, but still not the effect as "other cats" had. I was disappointed with the cats! Ha! Will replace mini-catnip bag to see if that helps. Love the size, coloring, authentic ness, well made, and usb charging vs batteries. 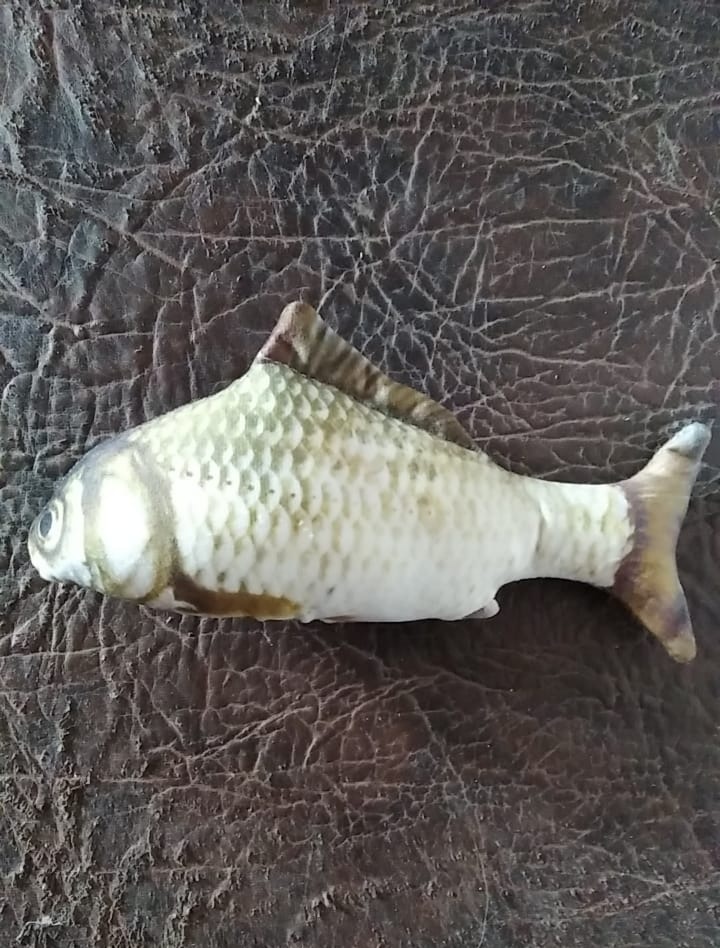 Glad I found a fish toy that for real moves. It looks real and my boyfriend freaked out when he saw it bouncing around on my kitchen floor! The only issue I have is that the fish never stays closed so the plastic moving mechanism keeps falling out and I have to keep putting it back in. I plan to either sew snaps on it or maybe try sticky velcro dots to help keep it closed. Also my dog is more obsessed with it than my cat. Go figure! 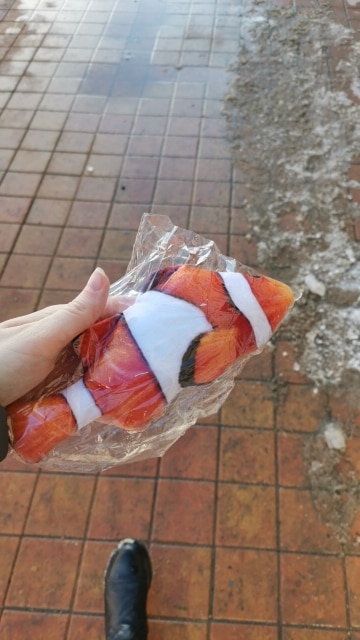 I'll be honest - Instagram seems to have figured out I have a cat and started advertising this to me. I caved in, and bought this version on Amazon. Initially, I was disappointed. The thing looks exactly like it does in the picture, but it is much thinner than I imagined. There is a simple plastic mechanism inside and the cloth fish-like container is about the thickness and texture of cotton gloves. When I fired it up it made a terrible racket. The "fish" wriggles so hard that it was reverberating throughout the house because it was banging on the wooden floor of our family room. At first our cat, Nelson, just sat there staring at it, but gradually he became interested enough and started playing with it. Does the job, in other words. Oh, and a word of advice? Unless you want a heart attack in the middle of the night, switch it off before you go to bed -- cats like to attack their favorite fish at night, I've learned. 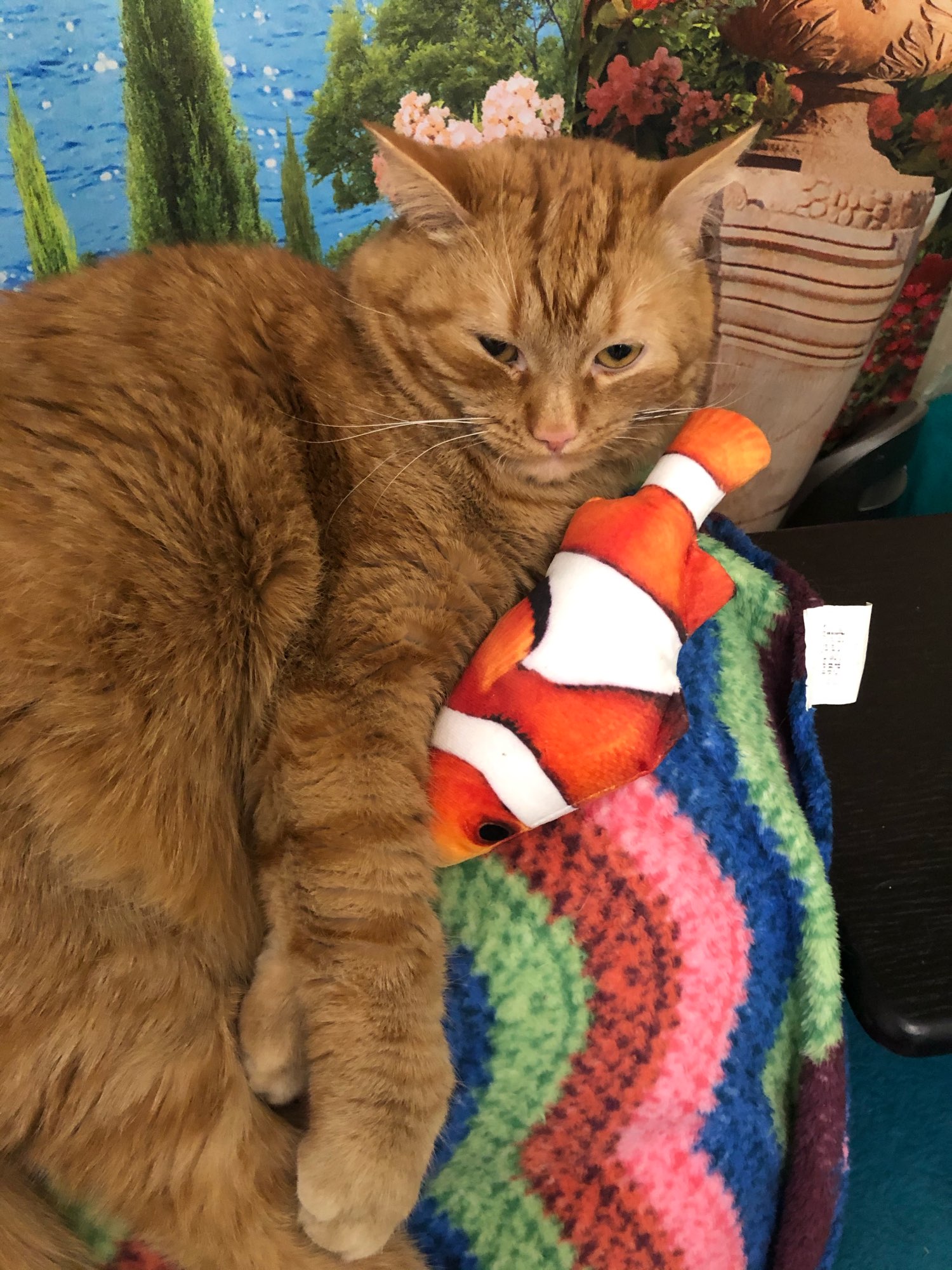 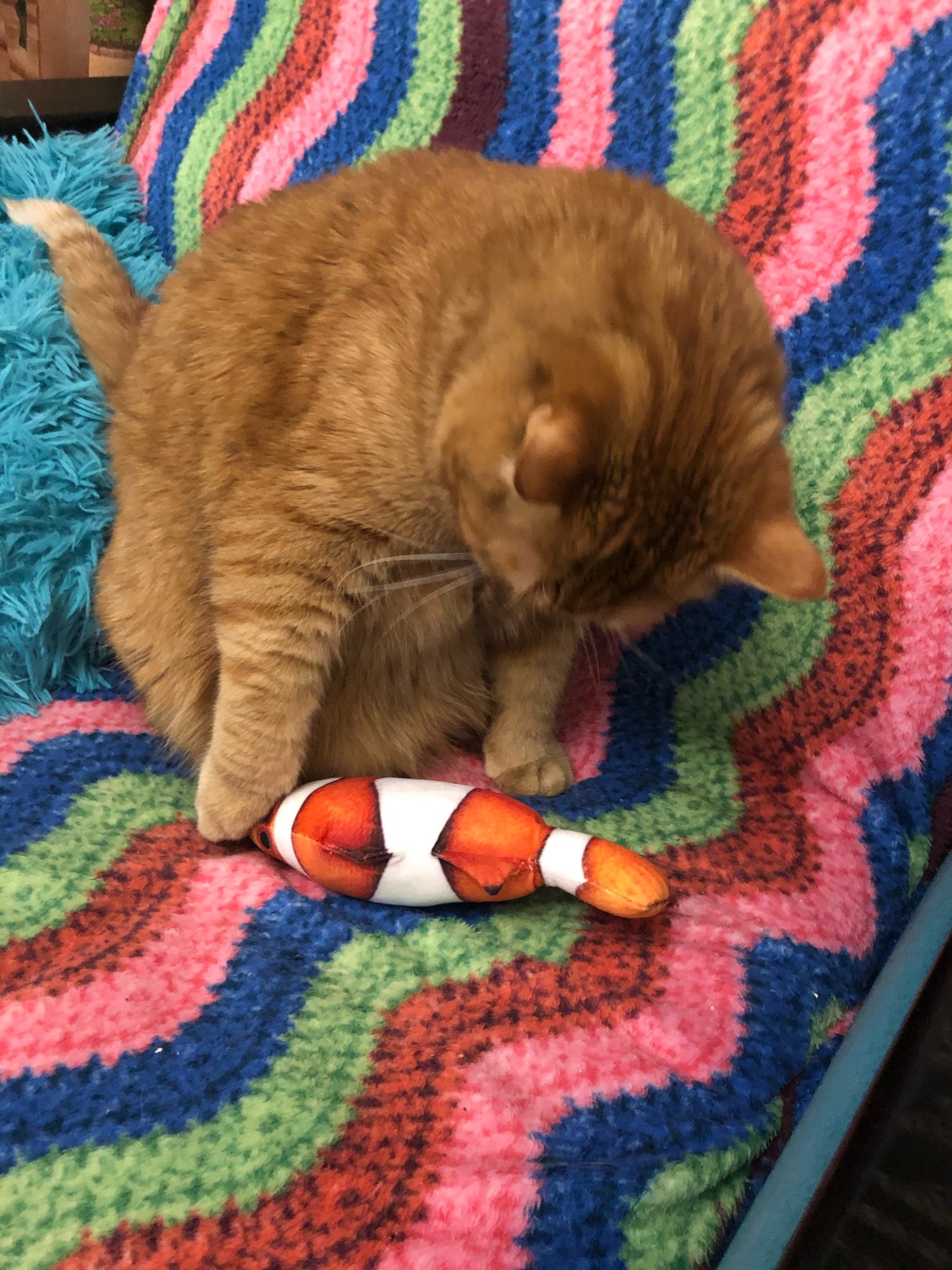 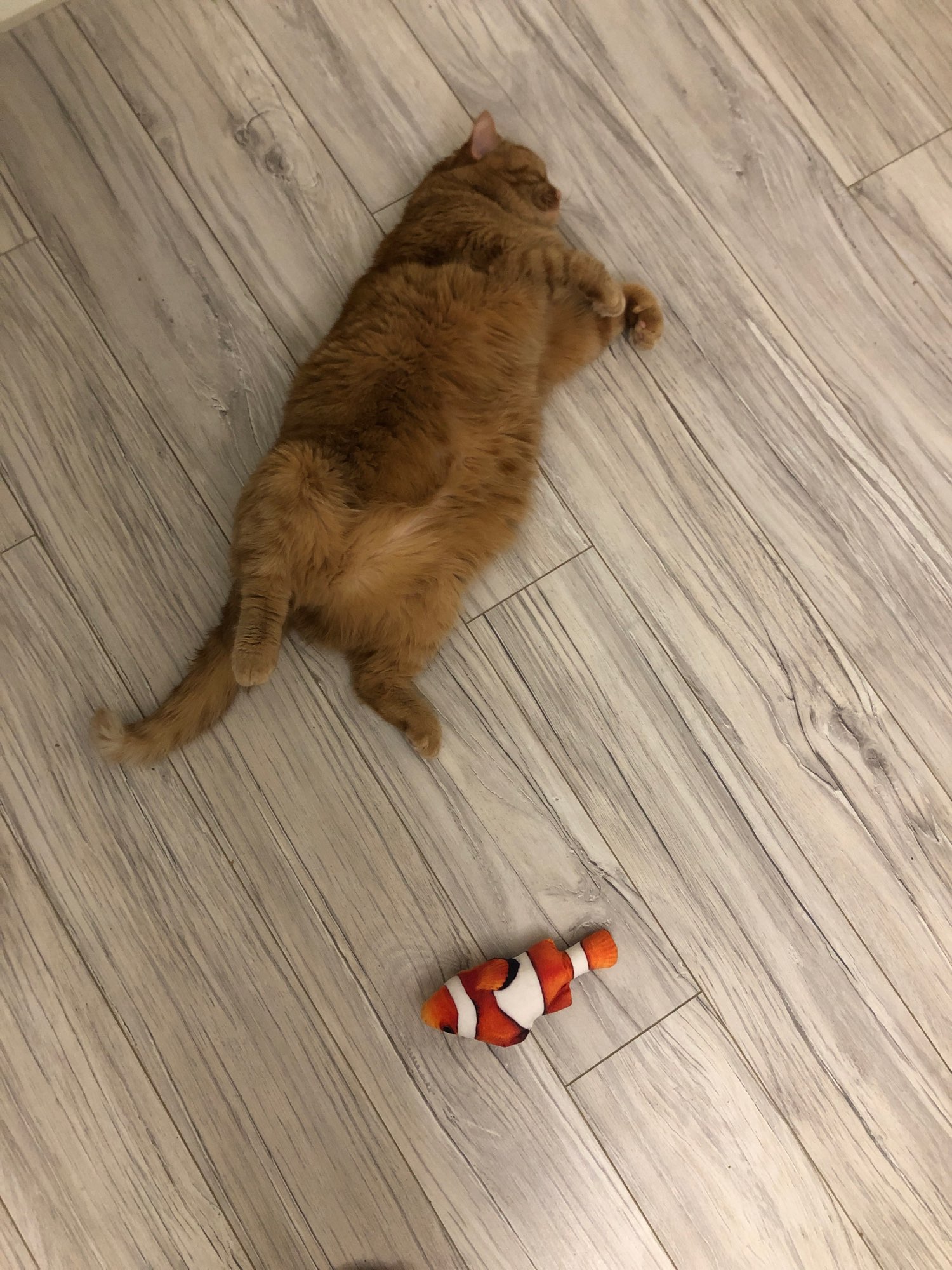 Its loud, so my cats aren't sure of it. They mostly watch it, but if I turn it on they don't like it, If they accidently turn it on, and it hits them with the tail they play with it, but I think that's because they want to kill the fish for hitting them with its tail. Yes I would buy this again. I wish the fish wouldn't move so fast. If there was a way to go slow medium and fast, I think the toy would be more enjoyable.